So I posted yesterday on my main blog that I'd like to make more use of all of my blogs and that this one in particular should become more of journal of our adventures as a family of backrodders... so here's one of our adventures.

Today, on what turned out to be one of the hottest days of the year so far, we went to see St. Nectan's Glen, between Tintagel and Boscastle. It's a place we've wanted to visit for a while and despite it being about an hour and half away it was so worth it! 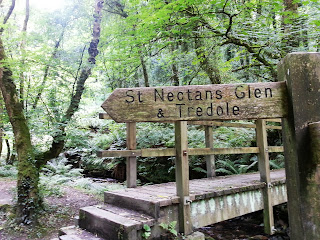 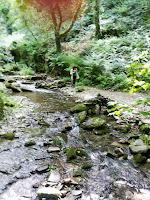 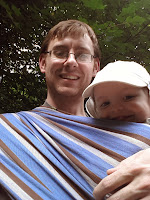 It's about a mile walk from the carpark to the shop/cafe and as usual I had Isaac in the sling. We were taking plenty of pictures on the way, and Isaac even took a few, including this lovely one of his mama with a bit of his finger included.

We had a quick lunch, in the company of a surprisingly bold robin who even attempted to snack on another diners sandwich straight from her plate and then descended the steps into the valley below.

Wow! I did not expect to see what we saw! 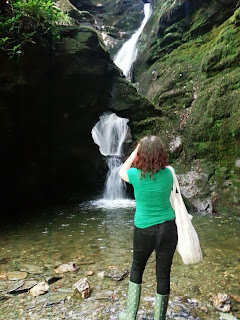 But one of the highlights, at least for me, was that Isaac had a go at walking through the water with his wellies on. Isaac takes after his mama; Lucy didn't start walking until 22 months and Isaac's looking set to be walking around the same time. Right now he's just about managing to walk holding our hands, something he's only been able to do with something resembling stability for the past week or so.

To be honest he was getting a bit fed up; something along the lines of, "Yeah it's pretty, but I'm bored of being stuck in this sling and not moving. Let's go Dada! Stop taking so many pictures." Even so, he was really enjoying it when I splashed in the stream.

Lucy and I were feeling bad because there were other children enjoying the stream, either wearing wellies or just barefeet. I was worried that Isaac would want to sit down in the stream like he does in the sea, which probably would've been ok except we only had an emergency nappy with us and no wrap to put around it. But we had his wellies and in the end Lucy convinced me to give it a try.

Lesson for the day, sometimes it's good to try and say yes, even if you're not sure it will work. He loved it, so much so that he didn't want to leave.

It must've been such a challenge for him, but he tackled it with the same determination and persistence we see so much from him. 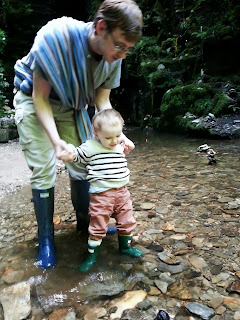 This evening Isaac's photo taking continued; I now have a lot of great photos of Isaac's toys on my phone, and they're all better than the photo's I take...
Posted by Unknown at 23:24